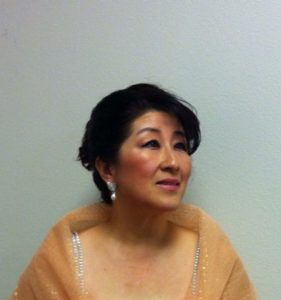 Ms. June Kim holds the Vocal Coach position in CantAmore Chorus and is one of the initial members of the chorus.

She received Bachelor’s degree from Seoul National University in Voice, and Master of Music degree from Yon Sei University in Korea. Her study followed in Europe where she focused her specialty in vocal coaching and opera directing at “Mozarteum Academy”. During this time, she took part in “Santa Cecilia”
opera class (Rome, Italy) and “Mozarteum Academy” opera class (Saltzbrug, Austria).

As a singer, she took many roles in operas including ‘Papagena’ in Mozart’s “Magic Flute” and ‘Mimi’ in Puccini’s “La Boheme”, and in oratorios such as Handel’s “Messiah”. As an opera directing staff, she participated in Jae Myung Hyun’s “Chun Hyang Jeon”.

Currently, she teaches voice and piano at her own music studio and is actively involved in many musical events in San Diego area.